My Ottoman Turkish army is not big enough to fight a battle with it. However this weekend I could organize an Ottoman versus Hungarian battle with my friends because they have far enough figures to set up a large Ottoman army. 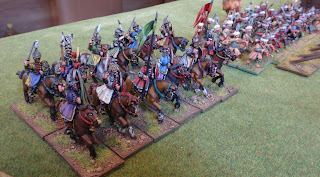 3000 point armies fought on both side. The Ottomans set up their troops in a classical order:
The janissaries in a wagon tabor, azabs and some handgunners made up their strong centre. The cavalry troops were set up on the flanks of the infantry. Their right wing cavalry contained a unit of the elite kapikülü sipahis, timarli sipahis and akinci light cavalry. The left wing was not as strong as the right, because only one timarli sipahi unit and some akincis were ordered to defend the left flank of the infantry centre. The Ottoman army had four cannons which were spread along the lines of the whole army.
The Hungarians had a very similar battle order: their infantry contained the centre, the light cavalry the right and the heavy cavalry the left wing. The leaders of the Hungarian army (me) made huge mistakes during the deployment phase and during the whole battle. 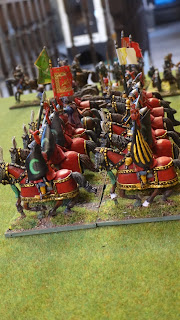 The battle started with the advancing of the Turkish akinci light cavalry (they were allowed to make an extra standard movement just before the deployment because they have "nomad cavalry" special rule). The Hungarians tried to answer this with crossbow fire and the székely cavalry on the right wing moved forward to make the akincis run. The Hungarian infantry centre advanced to occupy the Ottoman wagon tabor and because of this the cannons lost their defending troops. The Ottoman generals immediately noticed this huge tactical fault and sent their right wing akincis to capture the Hungarian artillery. 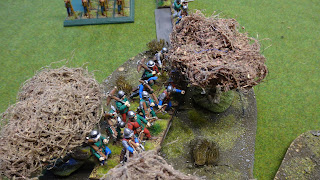 On the right wing of the Hungarian army a little light cavalry battle started between the székelys and the Turkish akincis. Unfortunately the Turks won it and the Hungarians had to retreat because of their losses.

After this we had to finish the battle because we had run out of time, nevertheless this battle was a good parade for our 15th century armies and we decided to organize more battles like this in the future and we will keep you informed.
Posted by Der Hauptmann at 23:02