I had to pause my wargaming hobby for several months because of my school obligations. This summer we could gather again with my friends and set up a huge 15th century battle with 7000 point armies on both sides. 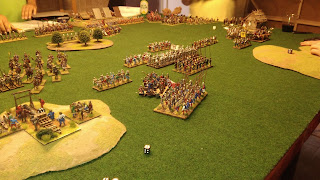 As ususal, we used the WAB rules with the army lists of the "Vlad" book. On the Christian side one of my friend's medieval German army and my Hungarians fought together. Unfortunately we weren't able to use the Germans as Germans because there is no German army list in the Vlad book. Some of them were mercenaries and the others became Hungarians. The Christian army consisted of heavy cavalry with full plate armour, some light cavalry and a strong infantry with dismounted knights, pikemen and missile troops. The Ottomans brought a lot of kapikülü troops: 5 jannisary ortas, two elite sipahi regiments and 9 cannons! They also had plenty of eyalet soldiers: azabs, timarli sipahis and akincis. Their allied forces were Serbian knights who became the powerful heavy cavalry of the Ottoman army. Both the Turkish and Hungarian army had nearly 300 figures.

The army formations had been planned before the battle, so during the deployment we only had to set up our troops according to the plan we drew. While setting up the armies, we had no idea how was the enemy going to be deployed on the table. On the Hungarian side the infantry made up the strong center. It was deployed in 3 layers: the crossbowmen and handgunners were in the 1st, the dismounted knights in the 2nd and the pikemen in the 3rd line. It was a huge mistake to put crossbowmen in the first line because according to WAB rules they cannot shoot while moving. When I ordered them to shoot, they hindered the infantry behind to move. When I ordered them to move, I couldn't take advantages out of them. Next time I would like to use skirmisher archers for this task, but first I have to buy and paint the figures. The cavalry on the wings had a similar formation: the first line consisted of nomad and hussar light cavalry and the knights lined up behind them. The hussars proved their skills in covering but the nomad light cavalry fled quite early and left the important heavy cavalry in front of the Ottoman artillery! As you can see from this, the Christians had the attacking role during the battle.
In contrast, the Ottomans were absolutely defensive. They installed artillery batteries on hills near the edge of the battlefield, protected by wooden mantles. Directly in front of them, the janissaries lined up behind stakes. Turkish army had three cavalry battalions. One was in the center with a unit of Serbian vassal knights and elite sipahis with the army general. The left wing cavalry also had elite sipahis and even timarlis. Both wing cavalry was supplemented with a lot of skirmishing akincis and azabs.

Prior to the start, the nomad cavalry moved his extra movement according to the special rules. The whole Hungarian amry advanced, the cavalry faster than the infantry. Cannon shots could be heard from both sides. It was a difficult task to move and navigate with such a huge army as this. The battle took two days and the Hungarians needed nearly a day to reach the Ottoman lines. During the advance, the akinci light cavalry and the azab irregulars bothered their Christian enemy with critical storm of arrows. The Hungarians's light cavalry - the task of which was to cover the knights - was destroyed during this and the lucky ones fled the battlefield. Only the hussars on the left wing reached the enemy lines: they made run a unit of azabs and after this they fought a melee combat with sipahis where they were slaughtered one-by-one. The arriving knights managed the situation with sweeping away the sipahis. 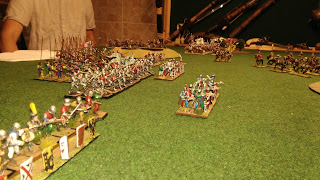 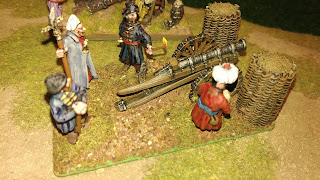 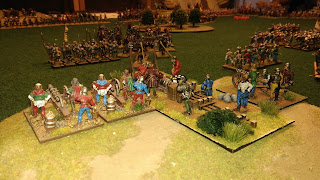 On the right wing things weren't going as well as on the left. The Turkish artillery managed to cause big losses to the charging cavalry. They also had less coverage. Akincis and azabs threatened them all the time. While they reached the enemy lines, nearly two thirds of them were killed.
At the same time the infantry advanced slowly. There was an annoying forest right in the middle of the table which delayed them. The Hungarian artillery was firing from the hills behing their army. They destroyed one Turkish cannon, killed many Serbians and sipahis. However they often failed because of the damn missfire dice.

On the second day the heavy cavalry of the Hungarian wings finally reached the lines of the jannisaries. They had to defeat a lot of units for this and many of them were killed during the advance. As a result of the close combat, the jannisaries were immediately beaten however they were defended by a line of stakes. This caused a panic test for the surrounding units. After the failed panic test most of the sipahis and the artillery crewmen started to flee. At this point the time was up, we finished the battle. It wasn't a clear victory for the Hungarians because the majority of their cavalry were killed during the furious charge. The infantry centre had only a few losses, but it couldn't reach the Ottomans. The dismounted knights successfully stopped the charge of the fearless Serbian heavy cavalry. Maybe the strong Hungarian footsoldiers and the remaining cavalry would have been able to defeat the Ottomans...