Later on my plan is to prepare a post after every unit I finish. This is the first one:

The baronial troops played a very important role of the 15th century Hungarian armies. That is why at first I painted one for my Hungarian army of this period. These banderial troops mainly contained heavy cavalry/mounted man-at-arms and they were well trained soldiers who fought as mercenaries for a baron.


I want to concentrate for the second half of the century with my project and based on this I selected a baron. Stephan Báthori (1430-1493) filled the position of the Transylvanian voivode between 1479 and 1493. He had a very important influence on politics during these times. The biggest result he earned in his life was the victory in the battle of Kenyérmező against a smaller Ottoman army (20000 men) that attacked Transylvania.

I used the Perry Miniatures Mounted Man-at-Arms plastic box set for representing his unit. I really like this set because you can get excellent quality figures for a good price. It is the most useful set for representing heavy cavalry from the second half of the 15th century compared to other manufacturers.

The unit contains 11 mounted knights in full plate armour with plate barding on their horses. The 12th figure in the unit is the personal character of the voivode in goldened armour. I painted the flag of the unit on my own. You can see the coat of arms of the Báthori family on the flag.

For assembling the figures I checked real 15th century miniatures form different chronicles. At first, painting the shiny plate armour was very difficult but after the second figure I decided to use Citadel metal color instead of Vallejo silver, but later on I retained the Vallejo black washing ink. This match proved to be good for painting the plate armour. 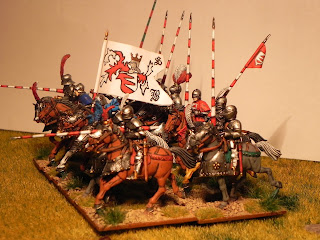 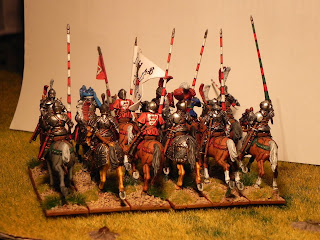 For representing the voivode as a personal character in the unit I wanted to make something unusual. For this I sculpted a noble hat with ostrich feathers from Greenstuff. The hat was put to a head that I chose from the set (the head without any hat or helmet and it has a knightly hair style). The beard and the moustache on this head are also sculpted on my own from Greenstuff. The baron wears a full goldened plate armour and also his horse has goldened plate barding. You can see in Hungarian miniatures from this period that goldened armour was really popular among barons or kings. It symbolised their power and wealth. 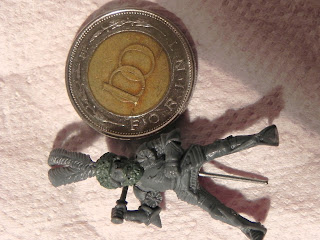 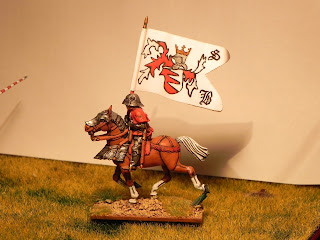 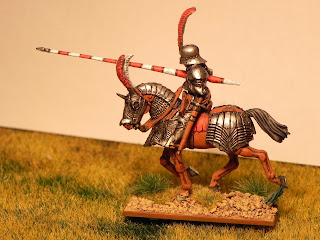 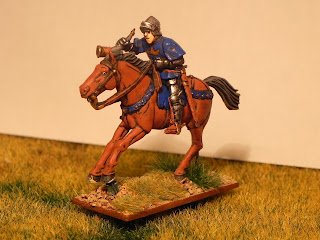 Now the unit is fully prepared to make a successful cavalry breaktrough!