We played our biggest WAB battle ever with my friends during our holiday. The battle was a random battle from the Hundred Years War with 3700 point armies! It was an “all into it chaos battle” because the figures were very mixed (Swiss mercenaries in the English army and some crusader era figures in both armies). 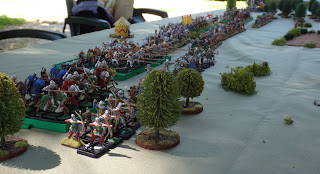 The French defended a little farm on their side of the battlefield and the goal of the English was to occupy this object at least with two units and keep it for two rounds.
At first the French set up all of their troops because they were the defenders. They made big mistakes. Most of their troops were on the right flank and only a few units defended the farm in the center. Their left wing was also quite weak with a unit of heavy cavalry poorly supported by some foot and mounted crossbowmen.

The English concentrated mostly on the right flank and the center. The foot knights, the foot man-at-arms and the Swiss pikemen created the center. The longbowmen lined up in front of the whole army to defend the more important units from the French crossbowmen and in this way they also could return enemy fire. One unit of mounted knights were on each flank and the left flank cavalry was led by the Black Prince.

At the beginning of the battle the main English army marched forward and the archers started to shoot. Meanwhile the French realized their mistake and they moved a unit of dismounted knights into the farm to defend it. The French heavy cavalry on the right flank started to get around the forest to attack the English from behind. However, the French cavalry on the left flank could not stop the English army directly marching to the farm. The massive fire of three archer units beat the French left wing cavalry and because of this the English mounted knights were able to charge. Finally, three English units reached the farm and occupied it. The English foot sergeants and knights stopped the French outflanking manouvers. 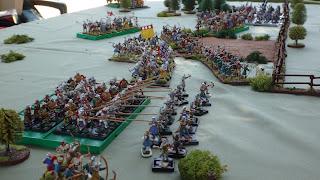