As I said in the introduction my other favorite period is the Great Northern War. I really like Peter the Great and his age therefore I am painting his army for the GNW project in 1/72. One of my friends has a Swedish army as enemy against me. For my Russian army I have completed 3 infantry regiments, a dismounted and a mounted dragoon regiment and a field artillery battery. We use the Foundry – Napoleon rule for playing the period. OK, I know this rule refers to another period but I think it can also represent the GNW because the main tactics were the same as in the age of Napoleon. On the other hand the Foundry – Napoleon is an excellent wargaming rule! 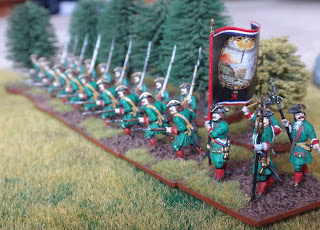 The flagship of my GNW Russian army is the Preobrazhensky guard regiment. As the historical background of the guard we can tell that it is one of the world's oldest military units! When Peter the Great was a child he lived in Preobrazhenskoe and he organized a toy army for himself. But this toy army was different from the other toy armies, the soldiers were real kids from the Preobrazheskoe village. The regiment had its own uniform and they became the most important supporters of Peter. Eg. once when the young Tsarevich was playing with his little army – during a siege game some soldiers from the regiment died because Peter shot them with mortars! When the Tsarevitch grew up, he did not forget his toy army. He formed his real guard from the “toysoldiers” and the name of guard became the Probrazhensky guard regiment because of Peters childhood home. Peter founded an another guard unit this was the Semenovsky regiment (Semenovskoe is a village next to Preobrazhenskoe). The later tsars preserved the tradition of Peters guard regiment.
I used the Zvezda - Russian infantry of Peter the Great set for the guard. It is a useful set for this period because we can also use it as line infantry. Inspite of this it is very mixed because we can find soldiers in the early (1708-1720) and also in the later period Russian uniform (1721-). My guard unit contains 24 figures. There is an officer, a sergeant, a standard bearer with the regimental flag and a drummer on the command base. The color of the regiment's uniform is the “standard” Russian green and red but their buttons are gold instead of silver and the edge of their tricorne is also gold instead of white. 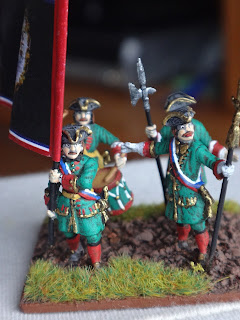 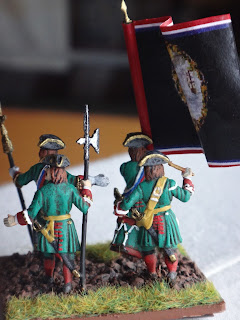 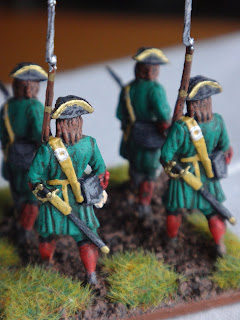 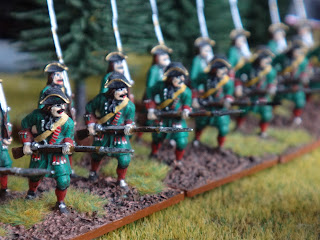 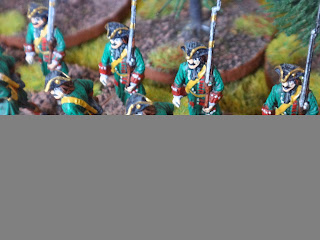