One of the most successful types of light cavalrymen were the hussars. These fast and tricky horsemen in their beautiful uniforms made great impression on their viewers all time. The hussars had particular moustache and hair style and the virtue of the hussar is famous all over the world. As the saying goes: "the hussar flees with charging!" 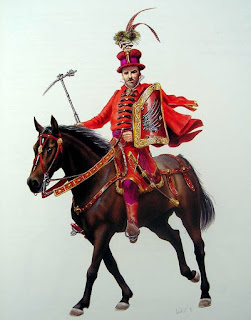 These soldiers had Eastern origins: in the 15th century the attacks  of the Ottoman Empire became more and more intensive in Central-Eastern Europe. The people who lived in the Balkans and Southern Hungary were in dander so they had to defend themselves. Most of the Turkish soldiers who raided their lands were Eastern light cavalrymen. They were well trained horsemen, archers and lancers. Against this kind of enemy the people in this area had to to use similar soldiers. The Hungarians had significant light cavalry traditions earlier so the hussars inherited the "virtus" of the nomadic horsemen.
However we also have information that the hussars were Balcanic horsemen, Serbians and Croatians. The wargame army lists often mention them as Balcanic "Stradiots" or Serbian hussars, but in my opinion this is not punctual. We cannot say that the origin of the hussars was only Hungarian or only Balcanic. The hussars in the 15th century were "international" soldier type of this area. They simbolized the unity of the Southern European nations against the brutality of the Ottoman conquest. Also a lot of Serbians settled in Hungary after the Turks invaded their own country in 1459. The first mention of the hussars in written sources is from 1403 (these source mentioned a hussar captain) and later they were the most important soldiers of the Hungarian border castles. King Matthias also applied hussars in his mercenary army - they became famous during their service in the "Black Army".
Instead of this later the traditional Hungarian soldier was the hussar and the hussar regiments in Western European armies were raised by Hungarian commanders (for example the Berchényi regiment in the French army of Louis XIV). Also in the army of the Habsburg Empire the Croatians were mostly uhlans in the 18-19th century and the Hungarians fought as hussars.
The weapons and the equipment of the 15th century hussars were different from their later ancestors'. Their main weapon was also the sabre but they had a lance, too (later in the 16-17th century they also used pistols and muskets). The tipical hussar shield was the "huszártárcsa" or "kotorgárd", the Ottoman spahis had similar shields. The mace was also a famous weapon mostly among commanders. They wore Eastern style clothes. This was different from the European fashion so the Western sources often called them exotic and unusual. The "mente" was their overgarnment with slit sleeves. The hussar armour was a leather gambeson or a chainmail. Their tipical hat was the "süveg" that was a round and flat hat decorated with feathers. In some pictures we can see other strange hussar hats similar to cilinders.


As I told earlier the hussars used eastern cavalry tacticks. This type of cavalry was extremely mobile therefore they often filled in skirmishing and scouting roles during the campaigns. Feigned retreat, hit-and-run attack or chasing the enemy was also an important trick of the hussar cavalry. They often set up traps for their enemies combining these tacticks. The hussars also took over brutality of the Ottoman horsemen - they often cut off the heads of their enemies and tied those on their saddles or pinned on their lances. During King Matthias's Austrian and Czeh campaigns the German chronicles often mentioned the ferocities of the hussars.

The hussar cavalry largely contributed to the successes of the Hungarian army in the 15th century. Especially the victory at Wrocław in 1474 was the merit of the Hungarian light cavalry. On this campaign Matthias attacked Moravia but the Czech and Polish allies set up a large army against the Hungarians. The allies had ca. 20-25.000 troops and Matthias only had his army with less than 10.000 men. (It should be noted that the Hungarian army only contained well trained mercenaries.) Matthias took the city of Wrocław while he heard the news about the Czeh-Polish counter attack and did not initiate an open battle with the enemy. Instead, he sent out the hussars and the light cavalry to destroy the supply system of the enemies. They were successful - the soldiers of the Czech-Polish army starved while they arrived to Wrocław. After starting the siege they could not occupy the city. The deadly fire of the Hungarian canons and their elite soldiers successfully defended the city. The hussars broke out and made raids against the besiegers and captured the baggage and the food supplies so the Hungarians did not run out from the supply during the siege. The Czech and the Polish ruler threw in the towel and moved away. Matthias could make a peace treaty with his enemies.
The later conflicts of the Turkish frontier established the hussars and at the end of 17th century they became part of most of the European armies.