This azab archer unit is the first unit in my 15th century Ottoman army: 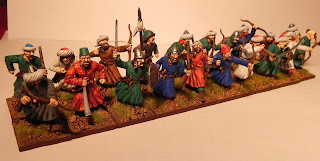 The irregular light infantry of the Ottoman army composed of azabs. They were Muslim (often Anatolian) volunteers who were not paid. Their most important motivation was plundering. The azab infantry was not trained or hard-hitting unit like janissaries. They often made the "donkey work" on campaigns: they were the cannon fodders, they built bridges, roads and they did the siegeworks. The fact that they were undisciplined even more reduced their value. Azab infantry used various weapons such as bow, sabre, spears, polearms and later guns, however most of them were archers.

As I said in my previous post, some figures of my Ottoman army are from Gripping Beast's Arab plastic box sets. These azabs were painted from the Arab Spearmen & Archers set. But I had to convert some figures in order to represent azabs instead Arabs (in the reality not only one letter is the difference). For example in one set you can get 40 figures and only 16 of them are archers, the others are spearmen or swordsmen which are not too useful as azabs. I was able to solve the problem with using the bow holding arms of the light and heavy cavalry set. Out of the 20 azabs that I completed, 15 are bowmen. 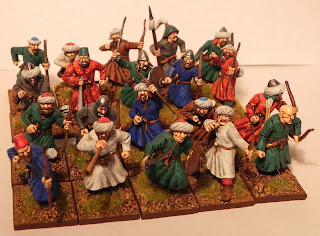 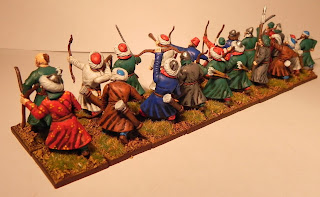 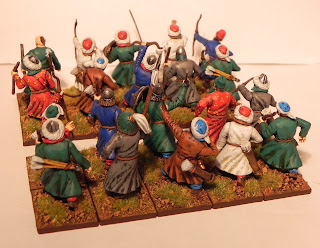 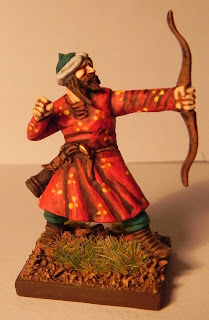 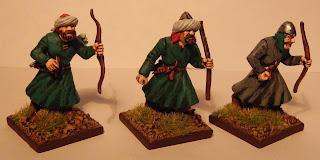 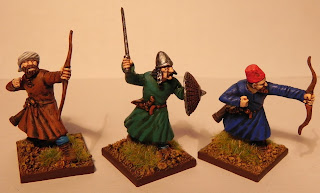