As we are approaching the end of this year, I started to make plans for the next year. The decision was not too hard: I am planning to put together a 15th century Ottoman army next year.
It will be useful as an enemy for my 15th century Hungarian army and I also know other wargamers who are interested in this period. In this post I want to give details about the historical background, useful rules and figures of this project. 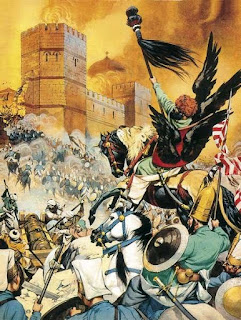 In my earlier historical background posts I gave some information about the Turkish-Hungarian wars in the 15th century. In this post I want to deal with only the 15th century Ottoman Empire.
Everybody knows that the young Ottoman Empire - which was founded in the 14th century -  invaded most parts of the Middle East and the Balkans. They successfully occupied Constaninaple in 1453.
But why was this empire so effective and how could they secure the background of their agressive policy? We have to search for the answer in the structure and organisation of this state and its army. The ruler of the empire, the Padisah had full power over his country, the state apparatus was very centralized. The Ottomans inherited a lot of things from their predecessors, the Byzantines. Their administrative system and army organisation was very similar in certain aspects. This excellent organization coupled with the expansive behavior of the Muslims.

The key of their successes was their army - the biggest and best organized in the world at that time. The Ottoman army had two main parts: the Kapikülü an Eyalet troops. The Kapikülü (literally the slaves of the gate) were the elite, directly led by the sultan and the eyalet troops were provincial troops who were not as well trained as the Kapikülü. The Kapikülü troops were largely made up of enslaved Christian children who were collected within the limits of the devsirme system (means collection) and raised by the Padisah as Muslims. In Istanbul the Ottomans assorted these children and sent them to the Topkapi Palace to become members of the Kapikülü cavalry or officers in the sultans court or sent them to Muslim farmers who were supposed to bring up the children and later they became janissaries.
The Kapikülü troops had the following parts: elite cavalry, Janissaries, Topci (artillerimen), Cebeci (armourers), Baltaci (military engineers and pioneers) and Top Arabacilari (wagons and transport)
The soldiers of the several provinces made the Eyalet troops and the heads of the provinces were the beylerbeys. Most of these soldiers were: timarli sipahis, akinjis and soldiers of the garrisons and frontiers. 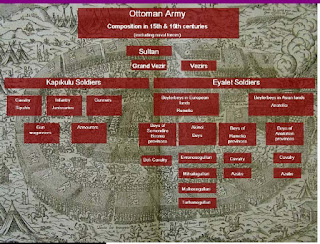 Maintaining this superarmy was a enormous logistical task, but the Ottomans made a remarkable success in this aspect as well. The supply system and management of their army was the most developed far away in the world. Ottoman soldiers were very rarely starving during campaigns. This logistical superiority meant a huge advantage against the christian European countries. None of the European countries in the 14-16th century had such a well organized and great army as the Ottomans had. Later the key to the success of the liberation war (when Hungary was liberated from the Ottomans by the Habsburg Empire) was the regular army, the christian armies in the second half of the 17th century could reach the level of the Ottoman army's organization.
The other advantage of the Ottomans was that their army had constant and experienced officer corps. Most of the officers of the Ottoman Empire were educated in the Topkapi Palace in Istanbul. 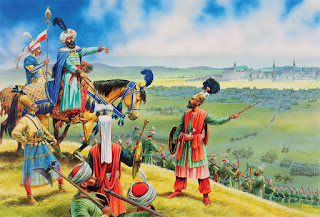 In order to play this period, the Warhammer Ancient Battles - Vlad the Impaler army list book is very useful. You can also use the Armies of Chivalry book because there also are Ottoman, Hungarian, Wallachian and Moldavian army lists in it. However the Vlad the Impaler book is the best choice because it fully specialized in the 15th century Ottoman wars topic and it gives you more detailed army list of these countries than the Chivalry book. 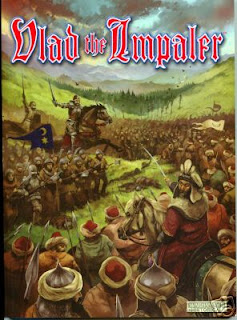 Collecting Ottomans is not too popular among wargamers and because of this there are quite a few manufacturers who produce figures for this topic. Assault Group, Essex and Redoubt Miniatures have Ottoman ranges however not all of their figures are authentic to represent the 15th century Turks. For example you can not use figures which have pistols (pistols appeared on the battlefields only in the 16th century) and some of the figures of these manufacturers can represent only later Ottomans
Most of these figures are metals, but I found a solution for this: the arab box sets of Gripping Beast (Light and Heavy Cavalry, Spearmen and Archers)  are good enough to represent the irregular and less trained soldiers of the Ottoman army.