After five months of preparition we could finally set up our table at the Games Day 2016. As I wrote in my previous post -  the battle was fought between the army of King Matthias and the Holy Roman Empire.
I put together a short description about the event and a battle report:

The mood on the Games Day was usual - there were a lot of people, interesting tables and figures. The organization was good, we could get the table that we reserved and the visitors could easily navigate  among the game tables with the help of brochures received at the gate. A lot of people stopped at our table and watched the battle, two or three of them even joined us.

The battle was fought in front of a German city which was besieged by the Hungarians. We didn't play the siege, only one heavy bombard was targeted to the gate of the city. The bombard could only fire once per two turns and the players couldn't turn it - it could fire only in the direction of the gate. 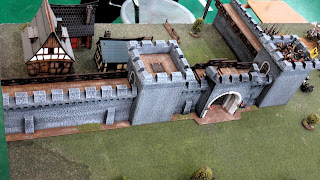 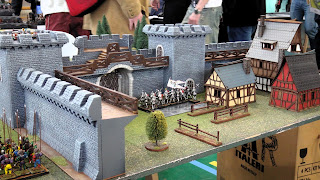 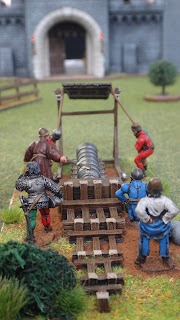 3000 point armies fought on both sides. The Hungarian army included two units of heavy and two of light cavalries (one unit contained 12 horsemen),  36 crossbowmen and handgunners, 24 heavy infantrymen, 32 pikemen, 10 skirmisher archers and 3 light artillery cannons. The army was led by Stephan Báthory, the voivode of Transylvania. The Germans had only one heavy cavalry unit however their infantry was stronger: they had ca. 40 footknights, 20 skirmisher handgunners, 28 landsknecht pikemen, 24 crossbowmen and handgunners, a verlorene Haufe, a light artillery cannon and a multi-barelled artillery piece. Friedrich III himself led the German army.

The Hungarian army arrayed in front of the walls of the city. Their right wing contained mostly cavalry and the left - which was exactly in front of the gate - included the infantry. The very best of the cavalry were the knights. The army general Stephan Báthori and the army standard bearer fought in the heavy cavalry. The székely light cavalry covered the left and the hussars covered the right flank of the heavy cavalry. In front of the cavalry the crossbowmen and the handgunners lined up behind pavises.
Contrary to the Hungarians, the Germans set up their army in two parts: the smaller part was in the city. This contained two units of footknights and a crossbowmen unit. They were able to break out in the 5th turn. 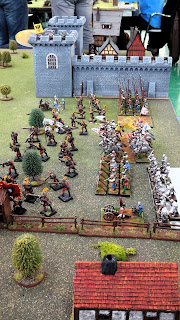 At the start of the battle the Hungarian cavalry moved forward. The crossbowmen took position and started to fire at the Germans. They weren't very successful because there were German skirmisher handgunners in front of them who caused a big loss to the Hungarians. On the right wing the hussars tried with flank attack but they had to stop because a unit of footknights and a cannon stood in their way. In spite of their losses, the Hungarian heavy cavalry charged and successfully made run two lines of the German infantry. Meanwhile, the German heavy cavalry and the landsknecht pikemen block advanced. Among the two parts of the Hungarian army were only a few weak units and the Germans attacked there. The light cavalry which secured the charge of the "heavies" tried to stop the Germans but they were beaten. The hussars left the battle and the székely cavalry retreated to their infantry while they made partian shots. After the Hungarian knights killed the fleeing infantry they turned back and charged the Germans. They had quite big losses before and because of this the Germans could push them back. Then the rest of the Germans broke out from the city and lined up in front of the Hungarian infantry. However, they didn't attack immediately because the massive block of the Hungarian infantry was too strong for them. Probably, they were waiting for support from the left wing.
This moment we had to finish the battle - the day was over. Truly, none of the sides could make a victory, nonetheless the position of the Germans was much better at the end of the battle. 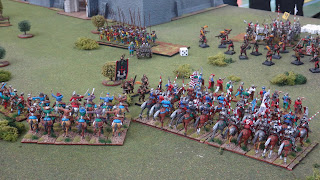 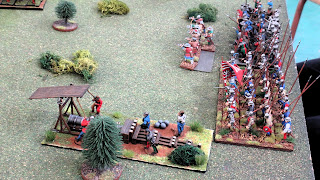 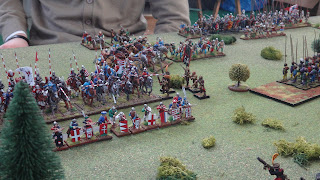 In conclusion we spent a gorgeous day on the event, had lot of fun, talked a lot with other wargamers and answered the questions of the visitors who checked our table.
Posted by Der Hauptmann at 21:46